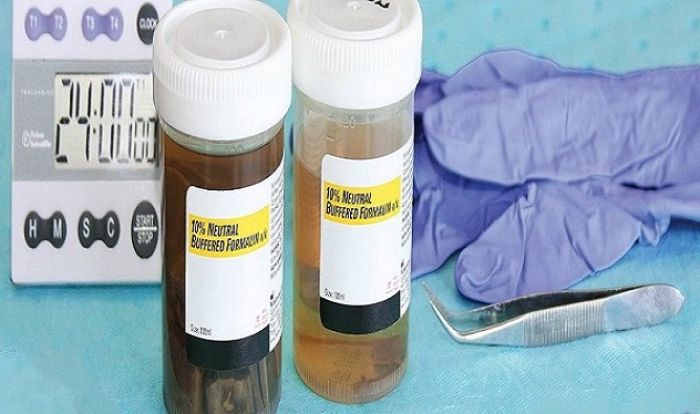 The importance of fixation

The broad objective of tissue fixation is to preserve cells and tissue components in a “life-like state” and to do this in such a way as to allow for the preparation of thin, stained sections. 1 Of course during fixation and the steps that follow there are substantial changes to the composition and appearance of cell and tissue components and these are quite far removed from the ideal “life-like state”. However, with care, we can produce consistent chemical and physical characteristics in tissue sections which allow patterns to be observed, morphological and chemical changes to be noted and comparisons made. These observations allow us a view of a dynamic ever-changing environment “fixed” at a particular point in time 2, and may enable a histopathological diagnosis.

For practical purposes fixation aims to prevent or arrest the degenerative processes which commence as soon as a tissue is deprived of its blood supply. Autolysis, which results in tissue digestion by intracellular enzymes released when organelle membranes rupture, and bacterial decomposition or putrefaction which is brought about by micro organisms which may already present in the specimen, are processes that must be prevented. Loss and diffusion of soluble substances must be avoided as far as possible by precipitation or coagulation of these components or by cross-linking them to other insoluble structural components. The tissues must be largely protected against the deleterious effects of tissue processing including infiltration with hot wax, but, importantly, tissues must retain reactivity to stains and other reagents including antibodies and nucleic acid probes. 1, 2

It is important to realise that a fixative will initially produce a number of changes to the tissues in what is usually an aqueous environment. These will include shrinkage, swelling and hardening of various components. Despite these initial effects tissues will undergo further changes during processing when they are placed in a non-aqueous environment. 2 For example fixation in 10% buffered formalin initially causes slight swelling of tissue specimens. During processing however the specimen may shrink 20% - 30% of its volume. 3 The particular fixative employed will also influence the degree to which individual elements will stain with various histochemical and immuno-histochemical reagents. 4 Thus the total effect on tissues of a particular fixative should be assessed after a tissue has been processed, sectioned and stained to demonstrate the required elements.

Fixation of tissues can be achieved by chemical or physical means. Physical methods include heating, micro-waving and cryo-preservation (freeze drying). Heat fixation is rarely used on tissue specimens, its application being confined to smears of micro organisms. However, microwave fixation, which can be regarded as a form of heat fixation, is now widely practiced in routine laboratories and will be discussed in Part 5. Cryo-preservation, usually in the form of freeze drying has some applications in histochemistry but is not usually applied to diagnostic tissue specimens.2

Chemical fixation is usually achieved by immersing the specimen in the fixative (immersion fixation) or, in the case of small animals or some whole organs such as a lung, by perfusing the vascular system with fixative (perfusion fixation). For some specialised histochemical procedures fixatives have occasionally been applied in the vapour form. For example paraformaldehyde and osmium tetroxide can be used to vapour-fix freeze-dried tissues.

Fixative solutions may contain a single fixative agent dissolved in a solvent such as water or alcohol or more commonly, a buffer solution to stabilize pH. Some popular fixative solutions contain several different fixing agents in combination, the rationale being that the defects in one agent can be compensated for by the addition of another. For example acetic acid is present in some formulations to counter the shrinkage caused by other agents such as ethanol. 5

Fixation may be considered “a complex series of chemical events”.6 Although we can now define some of these “events” our understanding of much of what happens during fixation is still incomplete. Cells and extracellular components contain peptides and proteins, lipids and phospholipids (membranes), carbohydrates and carbohydrate complexes, various types of RNA and DNA and so on. Just how these elements will react during fixation will depend on the type of fixation, the fixing agent used and the fixation conditions. Some tissue elements will chemically react with the fixative, be stabilised by cross-linking and thus preserved, others may be unaffected by the fixative but trapped within a cell or tissue by other fixed elements.

Classification of fixing agents and the mechanisms of fixation

Traditionally fixing agents were termed “coagulant” or “non-coagulant” based on their effect on soluble proteins in solution. 7 Coagulant fixatives were said to result in a permeable meshwork of protein strands whereas non-coagulant fixatives which are additive in nature, formed extensive cross-links producing a less permeable gel. These terms are still encountered in modern histological literature but a more systematic approach has recently been taken to classification. 2

There are two major mechanisms which are important in fixation of proteins and protein complexes: denaturation, and addition and cross-link formation.

Denaturation: Most commonly this effect is induced by dehydrants such as the alcohols or acetone. These reagents remove and replace free water in cells and tissues and cause a change in the tertiary structure of proteins by destabilizing hydrophobic bonding. Hydrophobic areas, frequently found on the inside of protein molecules, are released from the repulsion of water and become free to occupy a greater area. In hydrophilic areas of protein water molecules are loosely bound by hydrogen bonds and removal of water also destabilizes these bonds. The changes produced in the conformation of the protein molecules cause a change in the solubility of the protein, rendering water soluble proteins insoluble, a change that is largely irreversible if the protein is returned to an aqueous environment. 2, 7

Addition and cross-link formation: The non-coagulant fixing agents chemically react with proteins and other cell and tissue components, becoming bound to them by addition and forming inter-molecular and intra-molecular cross-links. Because these agents are reactive compounds they bind to a variety of chemical groups in tissues, often affecting the charge at the site of attachment. This can have an effect on the subsequent staining characteristics of a particular protein as well as altering its molecular conformation and thus its solubility. For example, tissue fixed with formaldehyde stains poorly with eosin because formaldehyde reacts extensively with amino groups to form methylene bridges and thus these groups are no longer available to bind negatively charged dye molecules such as those of eosin.

The extent to which additive fixatives form cross-links varies considerably. For example glutaraldehyde is more effective at forming cross-links than formaldehyde. 8 This explains why it so effectively preserves the ultrastructure of cells and is the fixative of choice for electron microscopy. It also explains why glutaraldehyde-fixed tissues stain poorly with conventional dye-staining methods. The chemical reactions of tissue fixation are quite well understood in the case of some agents such as formaldehyde but our knowledge of the mechanisms involved with some other agents is incomplete.

Antigen-retrieval methods in immunohistochemistry have shown that some of the reactions of fixation are reversible, particularly those of formaldehyde, but there is considerable variation in the quality of antigen preservation with various agents. The preservation of antigenicity has become a very important consideration when choosing a fixative.