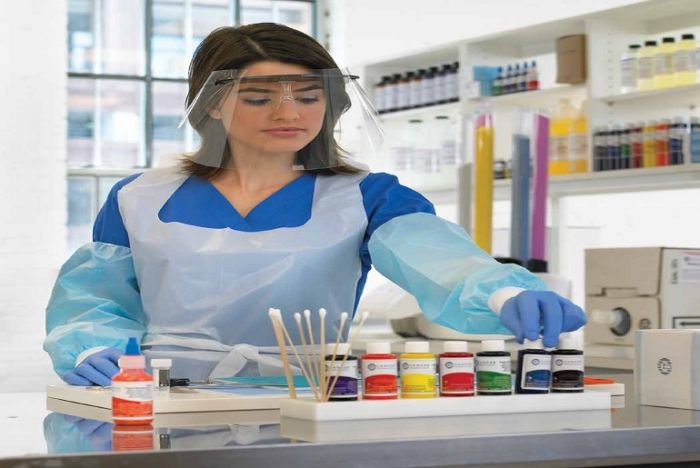 Routine H&E staining and special stains play a critical role in tissue-based diagnosis or research. By colouring otherwise transparent tissue sections, these stains allow highly trained pathologists and researchers to view, under a microscope, tissue morphology (structure) or to look for the presence or prevalence of particular cell types, structures or even microorganisms such as bacteria.

In the histopathology laboratory, the term “routine staining” refers to the hematoxylin and eosin stain (H&E) that is used “routinely” with all tissue specimens to reveal the underlying tissue structures and conditions. The term “special stains” has long been used to refer to a large number of alternative staining techniques that are used when the H&E does not provide all the information the pathologist or researcher needs.

Before tissue can be stained and viewed, it must be prepared so that a very thin section, only one cell thick, can be cut and placed onto a microscope slide. This involves fixing the tissue (so it does not decay) then hardening and supporting it so that it can be cut to the very thin sections  needed (typically 2–7 µm). There are two main techniques used for this, referred to as frozen sections and paraffin-embedded sections.

Frozen sections are used when answers are needed fast, typically during surgery where the surgeon needs to know the excision margin when removing a tumour. They are quick to produce, but typically do not create the same section quality of as the paraffin technique.. The process for frozen section preparation is as follows:

When paraffin sections are to be prepared the specimen is first preserved with a fixative and then the tissue structure is supported by infiltrating the specimen with paraffin wax. The process is more time-consuming than creating frozen sections, but provides better quality staining in most cases and the resultant samples (referred to as blocks) can be stored almost indefinitely. The paraffin section process is as follows:

Why H&E Staining is Routine

Hematoxylin and Eosin (H&E) staining is used routinely in histopathology laboratories as it provides the pathologist/researcher a very detailed view of the tissue. It achieves this by clearly staining cell structures including the cytoplasm, nucleus, and organelles and extra-cellular components. This information is often sufficient to allow a disease diagnosis based on the organization (or disorganization) of the cells and also shows any abnormalities or particular indicators in the actual cells (such as nuclear changes typically seen in cancer). Even when advanced staining methods are used, the H&E stain still forms a critical part of the diagnostic picture as it displays the underlying tissue morphology which allows the pathologist/researcher to correctly interpret the advanced stain.

In a clinical histology laboratory, all specimens are initially stained with H&E and special or advanced stains are only ordered if additional information is needed to provide a more detailed analysis, for example to differentiate between two morphologically similar cancer types.

Because of the volume of H&E staining needed, most clinical laboratories use fully automated systems and manual staining is now rare.

The H&E stain uses two dyes, hematoxylin and eosin. This combination is used as the dyes stain different tissue elements.

Hematoxylin reacts like a basic dye with a purplish blue colour. It stains acidic, or basophilic, structure including the cell nucleous (which contains DNA and nucleoprotein), and organelles that contain RNA such as ribosomes and the rough endoplasmic reticulum.

Eosin is an acidic dye that is typically reddish or pink. It stains basic, or acidophilic, structures which includes the cytoplasm, cell walls, and extracellular fibres.

Hematoxylin is extracted from the logwood tree and purified. It is then oxidized and combined with a mordant (typically aluminium) to allow it to bind to the cell structures. Of the many hematoxylin preparations used in histology Gill’s hematoxylin, Harris's hematoxylin and Mayer's hematoxylin are the most popular.

Eosin is formed by a reaction between bromine and fluorescein. There are two eosin variants typically used in histology: eosin Y which is slightly yellowish and eosin B which is slightly bluish. Eosin Y is most popular.

The term special stains traditionally referred to any staining other than an H&E. It covers a wide variety of methods that may be used to visualize particular tissue structures, elements, or even microorganisms not identified by H&E staining.

Other methods of staining use immunohistochemistry or in situ hybridization to target specific proteins or DNA/RNA sequences. These methods were sometimes also included as members of the “special stains” family. However they are quite different in method and purpose and are now typically separated into a third category know as “advanced stains”.

While there are literally hundreds of special stains for all manner of purposes, only a few are used with any regularity in clinical histology. The variety of stains also means that special staining is not as automated as H&E staining. While many larger laboratories do use automated instruments for the more common stains, they still have an area for hand staining. The complexity of some stains also works against the uses of automation.

The images below illustrate some of the common special stains and their applications.