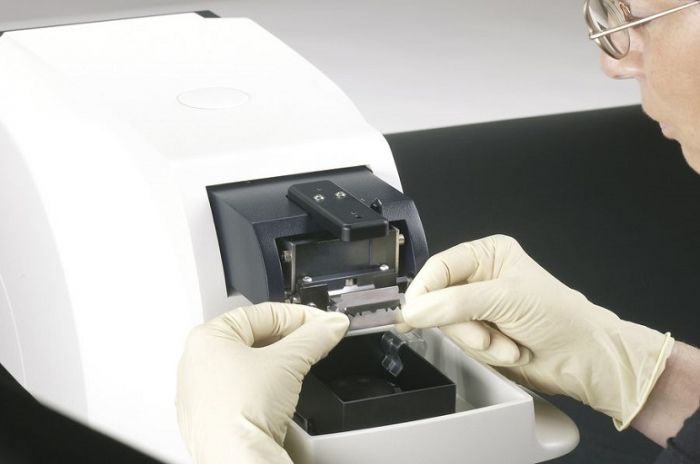 As the leading manufacturer of each of the major types of microtomes, Cryostats, sliding microtomes, rotary microtomes, and vibrating blade microtomes, Leica Biosystems frequently fields questions as to which one is needed for a given application, if they can buy just one and use it for all functions, why this one is recommended for this application, etc. This article addresses the advantages and limitations of Vibrating Blade microtomes.

Other microtome types require hardening the tissue by freezing or paraffin embedding. This is because a blade, no matter how sharp, pushed forward into a block of soft tissue, will compress the tissue in front of it rather than cut. When compressed enough to push back, the tissue will suddenly cut, but not straight through, the blade bevel and uneven compression will create deflections. However, soft tissue can be cut by rapidly moving the blade back and forth, thus creating a sawing effect as the blade slowly advances forward. Why cut soft?

Advantages of a Vibrating Microtome:

Disadvantage of a Vibrating Microtome:

This image from an old manual actually shows an incorrect blade angle and clearance angle. See the article Knife Angle in Microtomy. The Blade Angle is the angle between blade body and the direction of motion. Note that there is a bevel on the front edge of the blade. This is necessary for blade manufacturing. Clearance angle is the angle between the lower bevel and the direction of motion. The blade angle forces the tissue to bend upward at the blade front. This compresses cells on one side of the section at the bend, stretches them on the other. This distortion should always be minimized. However, if blade angle is zero, the clearance angle will be negative, because the bevel is still there. The back of the lower bevel will push down and compress the block as it passes over, and slide along the tissue. This is highly undesirable for any application. To avoid this risk the clearance angle, the angle between the bevel on the blade and the path of advance, must be above zero. At zero, there would still be some friction. An angle of about 1° would be perfect. There is no case where more than that is advantageous. Note in the picture that it is about 10-15 degrees, and thus bending the tissue more than is necessary. The correct blade angle is thus dependent on, and slightly greater than, the bevel angle of the blade being used, and no other property.

For mechanical reasons having to do with the natural frequency of oscillation, it is not mechanically advisable to speed up the back and forth motion over the same range. However, by increasing the amplitude of oscillation, with each oscillation still at the same frequency, one can have the blade moving faster against the tissue part of the time. As long as the greater amplitude is not tearing the tissue at the extremes, or causing vertical vibration of the blade, more is better, especially for tissue that wants to compress.

If the blade is slipping out of the tissue block, or compressing the tissue, try a slower advance. For the most critical applications, such calcium dual fluorescent imaging in live tissue sections, the slower the better, some use 10 minutes per section, as long as the tissue is still alive when you have the section. The trade-off is speed of getting the job done vs. section quality.

If the instrument is cutting alternate sections of different thickness, thick or thin, there are a few possible causes. Clearance angle negative is a common one, the blade angle is too low. Another is something loose. The pedestal, the tissue on it, or the blade is not tightly secured. Try to grasp and wobble things one at time, preferably without cutting yourself. Another possible cause is that the tissue has a high height for the base of support, and is flexing at the top, so the tissue is moving. Cut the block smaller if feasible. Or find a way to support the tissue better.